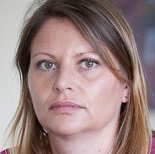 Rebecca Young – looking for work along with hundreds of others.

Hundreds of teachers are out of work as graduates fight for vacancies which can attract as many as 100 applications each. A new Ministry of Education report on teacher supply shows jobs remain hard to come by.

Aucklander Rebecca Young, 40, has been looking throughout the country for a primary school job since graduating in May last year. At least 40 of her graduating class were in the same position, she said.

“I get letters that say my CV is fantastic, but it is just the high volume of applicants. I got a letter the other day saying I was one of 100, so it has come down a little bit, from 140 or 150.”

Ms Young is now looking overseas after sending in more than 80 applications for primary school posts.

However, both the Government and an education school say the situation has improved, and further relief is on the horizon as population growth increases the need for teachers.

The 2013 Monitoring Teacher Supply report, released yesterday, provides a snapshot of vacancies in schools at the start of term 1.

There were 220.5 full-time equivalent vacancies in state and state-integrated schools at the start of the 2013 school year. That is the highest number since 2010 and speaks of an improvement in job prospects, however vacancies are still well down from the 2006-2009 period.

The report noted that “this drop in teacher vacancies may reflect the tightening of the New Zealand and global labour market or a change in the supply of teachers applying”.

Schools have reported a large response to vacancies. Maria Heron, principal of Mangere Central School, said more than 50 applications for positions had come in before the closing date on October 10.

“It will be a lot more than 50. I’ve been trying to shortlist, and so far I’m down to 16 really, really good people.”

The past three years have seen an increase in the number of New Zealand-trained teachers applying for permanent positions in primary schools, the report found.

Seventy-three per cent of primary schools had nine or more applicants for permanent positions in 2013, compared with 70 per cent last year and 59 per cent in 2011.

The number of applications at secondary schools has stayed relatively stable, with most demand for maths, Maori language, technology and science teachers.

The Ministry of Education says school rolls are forecast to rise, which will increase demand for teachers, initially at primary schools.

In the meantime, it has moved to reduce the number of overseas teachers in New Zealand.

“Supply remains strong in part because the number … leaving the profession remains flat after falling to a 10-year low in 2010-11,” said Rowena Phair, deputy secretary for student achievement.

The University of Auckland’s dean of education, Graeme Aitken, said at least 70 per cent of graduates from last year’s Graduate Diploma in Teaching (Secondary) who looked for jobs were now teaching.

The ministry’s report showed more positions were being filled by New Zealand-trained teachers, and the profession need not be defensive that entry into it was competitive.

Vacancies at the beginning of the school year