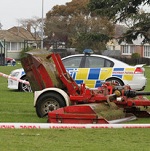 A 4-year-old boy died after he was run over by a council tractor-mower at a Hastings park last night. The “bubbly” boy was believed to have been playing around the tractor at Kirkpatrick Park in Camberley, when he was killed about 5.20pm. “The boy has come into contact with a tractor while it was mowing the fields,” Sergeant Ray Kirkby said at the scene: “He has received fatal injuries.”

Police said they understood the boy had been playing with older cousins when he was hit by the tractor towing a rotary mower. The boy’s grandmother Donna Hutana said she didn’t see the incident and didn’t want to imagine how horrific it would have been. “Oh my God, I just can’t believe it,” she said. “If that’s what has happened, if he’s gone under there like that, I just can’t believe it.”

Her grandson was a “very, very clever little boy” who was “bubbly” and loved computer games, she said. “He was full of joy and bounce.”

The boy’s uncle, who asked not to be named, said the “happy little guy’s” fifth birthday was approaching and he had spent his short life in the Camberley community.

Hastings Mayor Lawrence Yule said he understood the driver had left the tractor to tell the children to leave the area he was mowing before the boy was run over. “It’s an absolute tragedy. A mum and dad’s son has been taken away from them.

“We will investigate what happened and see what things need to be done to prevent something like this ever happening again. “I will be making contact with the boy’s family. Obviously this is the worst possible thing that could ever happen to a family and the parents of the young boy.”

Mr Yule said the tractor driver was “very, very shaken up” and he and his wife would be offered counselling and support. “It’s a tragedy for the boy, his family, the driver, the driver’s family and council staff.”

A local kaumatua blessed the site as family members and friends of the boy stood in disbelief before police began their investigations.

Sergeant Kirkby would not comment on whether charges would be laid against the driver.

The council and Ministry of Business, Innovation and Employment’s labour department are also investigating.

Boys out at the park and a guy doing his job have combined in what is an absolute tragedy. The investigation will focus on why was the mowing being done at that time of day? what speed was the driver doing? and why after he had spoken to the boys and was aware of the hazard they posed did he still manage to hit one of them? It is easy to sit back and judge, but when you are looking ahead and wearing hearing protection it is not always easy to see and hear what is off to the side of your path. The mowers tend to swing wide when they are cornering as well.

South Pacific Meats has been fined $23,000 after being found guilty of negligence in a 2010 saw accident in... read more