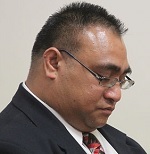 There are no winners in cases like this – very sad.

A Work and Income case manager who stole $194,000 from WINZ has been sentenced to home detention.

Police executed a search warrant on the home of Laki Scanlan, 42, after the fraud – the second-largest in Work and Income history – was picked up by the ministry’s internal fraud team last year.

He pleaded guilty in the Auckland District Court to five charges of obtaining by deception and one charge of accessing a computer for fraud.He took the money over the course of seven years by illegally paying it out to family members. Scanlan’s wife was also charged but she was found not guilty at trial.

Judge Claire Ryan said she was concerned with Scanlan’s “persistent belief” that he had done nothing wrong other than breaking a code of conduct that prohibited working on the files of family members. “He thinks he did nothing wrong. He thinks it was perfectly OK to give benefits to his family.”

Judge Ryan said he granted benefits to family who were living overseas and recorded having meetings with them while they were away. He granted accommodation supplements and special benefits to relatives, some paid into his wife’s account.

Scanlan told authorities he was under pressure to provide for his Samoan community. However, Judge Ryan said she was “not prepared to say, because he was Samoan he was more likely to commit fraud to provide for his ‘aiga (family)”.

Scanlan’s lawyer said his client had his life “blighted” by his offending. He had lost his position as a citizen pastor at a Mormon Church and had been “dis-fellowshipped”. The shame and the loss of position in the church had contributed to a major depressive illness, the judge said.

She sentenced Scanlan to 10 months home detention. He will serve the sentence in his rented home in Massey.

The money will be recovered from the benefit he is on.