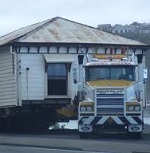 Rotorua company The Housemovers Limited has been fined $54,000 and ordered to pay a worker $40,000 after he was seriously injured after a fall from an icy roof.

The Ministry of Business, Innovation and Employment brought two charges under the Health and Safety in Employment Act 1992. The company failed to identify the hazard of ice on the roof when dealing with tangled wires and it failed to properly train its employee in the use of a safety harness, including the use of safe anchor points, the Ministry said.Â TheÂ company had pleaded guilty to both charges at an earlier hearing.

The victim fell 4 metres from the roof of a school building while attempting to untangle telephone lines during the relocation of the building in July 2012. He broke his leg.

Judge Michael Behrens QC noted that the company had health and safety policies to deal with the circumstances of the incident but said it was the company’s responsibility to have an employee in the position where he simply could not ignore the availability and use of safety equipment.
“It was an obvious hazard that had not been addressed by the defendant in any way. There was no specific training about health and safety when having to move in icy conditions. [The employee] should not have set foot on the roof,” he said.