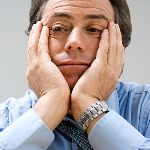 Until recently, I hadn’t really known any great leaders. As a writer, the highest-ranking people I deal with are editors, and they’re pretty much just writers who have gotten lazy. The only thing an editor has ever led me into is a bar.

So my images of leadership were based mainly on movies and sports. I figured great leaders did a lot of alpha-male yelling and inspirational speechmaking. To me, the epitome of leadership was when a baseball player is yelling at the umpire and about to get ejected and his manager runs out to the field to jump in front of him, so he can yell at the umpire and get thrown out of the game instead. In fact, I always thought baseball-team owners were awful people for not getting on the field in front of both the manager and player and getting ejected in their place. I may have felt this way because my favorite team was owned by George Steinbrenner.

But after spending time with a range of leaders for my new book, Man Made: A Stupid Quest for Masculinity, I learned that my vision of what makes a good leader was all wrong. I spent hours working alongside fire chiefs, army captains, Boy Scout troop leaders, and others who guide teams. To my surprise, the best of them tended to be quiet listeners who let other people make most of the decisions. They weren’t particularly charismatic. Or funny. They weren’t the toughest guys in the pack. They didn’t have a Clintonian need to be liked, or a Patton-like intensity. They were, on the whole, a little boring.

Like firefighter Capt. Buzz Smith, whose firehouse in Hollywood is one of the busiest in Los Angeles. For one thing, he doesn’t look like a “Captain Buzz Smith,” by which I mean he is not a plastic action figure. He has a gentle face, an easy smile, a mustache, and a general kindness to him. If he were cast as an astronaut he’d be the guy in charge of mixing Tang.

But what Capt. Smith and the other effective leaders I met have is a code. Capt. Smith isn’t weighing each decision based on a desire to keep his team happy, or to be fair to each guy. Capt. Smith has a way of doing things he believes is right, and he doesn’t waver. His mission is to follow the rules of the city, even if that means driving every 911 caller who asks to the hospital, whether they need to or, far more likely, do not. His job is to run a clean, orderly house so the team can respond with military precision. The calmness Capt. Smith exuded, I eventually realized, was humility. He didn’t need to express everything he felt immediately, because he understood that he wasn’t the most important person. It’s also a lot easier to feel secure in your leadership when you’re named Buzz.

Everyone at his firehouse knows they are doing things exactly right. And that seems to make them both proud and assured. They would do anything for Capt. Smith. Not because they love him â€” I’m not entirely sure that outside of the firehouse he could inspire them even to switch TV channels â€” but because his deep belief in his mission makes them also believe in that mission.

What Capt. Smith understands is that inspiring people through your personality is a risky, exhausting endeavor. But if you make people feel like you’re going to help them accomplish something far bigger than you â€” not just saving lives, but living by a system that provides dignity and pride â€” you can let your belief do the work for you.

I cannot believe, actually, that there’s not one of those inspirational wall posters about boringness. It’s a lot more effective than screaming.