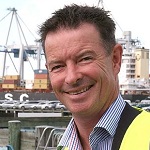 File photo of Ports of Auckland CEO Tony Gibson posing in front of cranes that are not getting worn out with over use at the moment.

Ports of Auckland boss Tony Gibson is setting out to replace striking union workers with private contractors on the city’s troubled wharves.

In a sign that the long-running dispute between the Ports and the Maritime Union is escalating, Mr Gibson yesterday said he was “absolutely” prepared to replace 330 union jobs with private contractors to get a more flexible workforce.

“This is not a threat,” said Mr Gibson, who has run out of patience with the union and strike action.

Union workers at the port began another 48-hour strike at 11pm yesterday, the fifth since November.

The warring parties are due to begin a fresh round of mediation on Thursday with the port company having made a final and non-negotiable offer to the union. A counter-offer by the union failed to deliver the improvements needed in work practices and productivity, Mr Gibson said.

He said the company was able to bring in private contractors under the current collective agreement.

After signalling a proposal to contract out the labour force before Christmas, the port company is taking the first steps this week to find private contractors to run the wharves.

“We have got to get on with business. We have got leakage, we have lost customers, we need to lift our game and change and it has got to be done quickly,” Mr Gibson said.

His solution is at odds with Auckland Mayor Len Brown, whose council owns 100 per cent of the port company.

Mr Brown told the Herald on Sunday that any suggestion of smashing the union to make the port more productive and profitable for the port was “ridiculous”.

Last night, in a written statement, Mr Brown said he had been assured by both parties that they remained committed to reaching a collective agreement and had confidence they would go into mediation determined to negotiate in good faith.

“This is an employment dispute that the parties need to resolve together,” Mr Brown said.

Maritime Union president Garry Parsloe said he had been trying to get into mediation to call off strike action, but Mr Gibson had been on the beach at Papamoa and returned from holiday threatening staff with their jobs.

“We have got an employer bullying their workers, threatening them with their livelihoods and threatening their families. It is not the way we do things in New Zealand,” he said.

Mr Parsloe said Mr Gibson had not thought through the consequences of making more than 300 staff redundant, which would cost about $24 million.

Axed KFC staff get their jobs back

Following a public outcry KFC has been contacting laid off disabled workers with offers of re-employment. Some workers have... read more