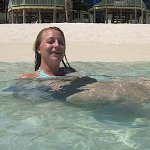 Amanda Akeson in happier times before she was voted off the island by her employers.

A Swedish au pair taken on holiday with the Kiwi family she worked for was dumped at Samoa’s airport for refusing to work while they stayed at a Pacific resort.

Janine and Hamish Learmonth claimed their nanny refused to work once they arrived at their idyllic holiday spot.

And after accusing Amanda Akeson of wrecking their holiday, the Learmonths sent an “emotional” Ms Akeson packing to the island’s international airport.

But the Queenstown couple have been ordered by the Employment Relations Authority to pay Ms Akeson $1190 in unpaid wages and holiday pay.

ERA member James Crichton said in his determination “this was not an employment relationship made in heaven”.

He described how things came to a head during the Samoan getaway last November.

“The Learmonths say that there was a period … when Ms Akeson simply did not work. As a consequence, the Learmonths decided to send Ms Akeson back to New Zealand.

“Ms Akeson formed the view that the relationship with the Learmonths was tense and that the unfamiliar Samoan environment made things a whole lot worse.

“She says that the Learmonths forced her to leave because she was ‘wrecking their holiday’. Certainly, Ms Akeson is adamant that there was no sense in which she agreed to return home to New Zealand early.

“What is clear is that neither party was happy with the other.

“Ms Akeson refers to being ‘very emotional as I’d just come from Sweden and was taken to Samoa which turned into a nightmare for me with the Learmonths’.”

At the end of her contract, Ms Akeson, who worked 17.5 weeks for $200 a week, alleged the couple didn’t pay her final three weeks’ wages or any holiday pay.

Mr Crichton concluded that the legal position was clear, “even if the facts are not”.

He said a relationship between an au pair and a family is “still an employment relationship covered by New Zealand law”.

The disgruntled parents – who run an architect firm in Queenstown – have vowed to fight the ruling, claiming Mr Crichton failed to follow correct legal procedures and they weren’t given a fair hearing.

Mrs Learmonth, 33, said: “She just wasn’t up to the job. It’s a simple as that. While we were in Samoa, she couldn’t fulfil her role and we couldn’t trust her with our two young kids.

“She didn’t want to get out of bed, pulled sick days, and was very apathetic.

“She was employed to help us but she was more of a hindrance, and that is the reason why we sat her down and asked why she wasn’t coping.

“She agreed to leaving Samoa early, even apologising for the fact that she had been underperforming, but obviously changed her story when she decided she wanted to take us to court.”

The Learmonths say they are waiting for a response from the ERA adjudicator over whether the case will be reopened.

Ms Akeson was ordered to repay the Learmonths $179.69 for personal phone calls she made and $125 for the cost of a replacement tyre on the family car after she got a puncture while driving in her spare time.

Ms Akeson left New Zealand this week and was unavailable for comment.

Just because an employee is out of sight for a while (on parental leave) does not absolve an employer... read more