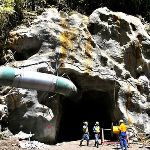 The Pike River Mine Entrance

The NZ Mines Rescue Service believes the initial shockwave of the first Pike River explosion killed most of the 29 men underground immediately.

The initial explosion occurred in the mine on November 19 last year.

Lawyer for the Mines Rescue Service, Garth Gallaway, made the claim during the inquiry into the disaster this morning.

He was based in Wellington as a response controller during the Pike River operation.

Based on information from Pike River management, Nicholls had initially believed some the men could have been waiting for rescue after the first blast.

However, Gallaway told the inquiry the NZ Mine Rescue Service quickly formed the view after the first explosion that most of the 29 men would have been killed immediately, or within an hour.

The men would have been quickly overcome by the noxious gases underground, or a lack of oxygen, if they had survived the blast, Gallaway told the inquiry.

Nicholls no longer believed the men had survived the explosion and become trapped underground, he said.

“Having reflected I think that the men died fairly quickly, in a very short space of time.”

Gallaway was critical of the failure of police to consult closely with the Mines Rescue Service following the explosion.

However the lack of input from the Mines Rescue Service to police national headquarters in Wellington was an issue, but not a “significant problem”, Nicholls said.

Police took control of the Pike River operation to bring “order” to a “chaotic situation”, Nicholls told the inquiry.

Under questioning by Gallaway, Nicholls said he was unaware of any discussion with other agencies involved in the operation before police took control.

Gallaway said former Pike River general manager Doug White gave evidence earlier in the inquiry stating there had been initial confusion over who was in charge of the operation.

Nicholls said he accepted discussion should have taken place before police assumed control of the operation, but “order had to be brought to a very chaotic situation”.

A statutory basis existed allowing police to take charge in such a situation, he said.

Nicholls said police would now do things differently in similar situations, such as have a smaller group of people involved in making decisions, less meetings and delegating police roles to free up key police staff.

The accident scene at TransDiesel.Police have released the name of a man crushed by a generator in a workplace... read more