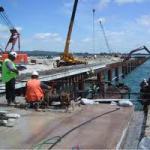 Northland Stevedoring Services Limited has been fined $37,500 today following an accident at Northport Wharf, which resulted in an employee on his first day at work having three toes amputated.

The Whangarei District Court heard that the employeeâ€™s right foot became trapped between the wharf buffer and a vessel as he passed a piece of timber to a colleague.

â€œJust as the employee stepped onto the wharf buffer, a container was lifted off the vessel, causing the vessel to lean towards the buffer, crushing his right foot,â€ says the Department of Labourâ€™s Whangarei Service Manager Rod Gibbon.

â€œThe employee had no previous experience in cargo handling and should have had direct supervision until he had the knowledge and experience to carry out the work safely.

â€œThe company had identified the hazard of the trapping point but left this employee completely unprepared for dealing with this hazard, resulting in him losing three toes,â€ says Mr Gibbon.

Since the accident, the company has ensured that new employees are adequately supervised and warned about the hazard of the trapping point. They have also placed extra signage on gangways to ensure that employees use them to access ships.

This case is a good reminder to employers that hazard management is from the beginning of day one for new employees and not something they grow into over time. Especially in a high rish environment like an operational commercial wharf.

The loss of toes is a high price to pay for a company to be forced to meet their obligations under the Health and Safety act.