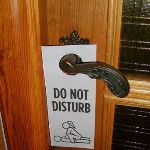 A public servant in Australia who was accidentally injured while having sex at a motel on a work trip is appealing a finding she is not entitled to compensation.

Her representative,Leo Grey, has told a federal court there was no suggestion she had engaged in any misconduct. He said her injury occurred during “an ordinary incident of life commonly undertaken in a motel room at night”.

The woman, who cannot be named, was injured when a glass light fitting came away from the wall above the bed as she was having sex with a man in November 2007.

The light struck her in the face, leaving her with injuries to her nose, mouth and a tooth, as well as “a consequent psychiatric injury”, described as an adjustment disorder.

Her employer had directed she spend the night in the town ahead of a meeting early the next day.

She applied for compensation from ComCare, the federal government workplace safety body, but it found that the sexual activity was not an ordinary incident of an overnight stay like showering, sleeping or eating.

Grey said she had been injured while engaging in “lawful sexual activity, noting there had not been any rule that employees should not have anyone else in their room without express permission of their department”.

Andrew Berger, for ComCare, said people needed to eat, sleep and attend to their personal hygiene but “you don’t need to have sex”.

ComCare, said the woman was having sex with “an acquaintance, who had no connection with her work”, and would argue that “neither legal authority nor common sense” could lead to a finding that the injury was sustained during the course of her employment.

The appeal hearing is continuing.

Some people will twist anything for money. I am with ComCare on this one. To claim an injury while having sex in a motel as a workplace accident worthy of compensation is stretching credibility a bit.

Also playing the “psychiatric injury” card is something we would expect to see aired in a US court. The light fitting didn’t fall down by itself. This is one of those cases where the claimant needs to be told to get over it and stop wasting everyone’s time.

Maybe she would like to show us where in her position description it says that having sex is one of her duties. But then again it was her position that caused the accident in the first place.